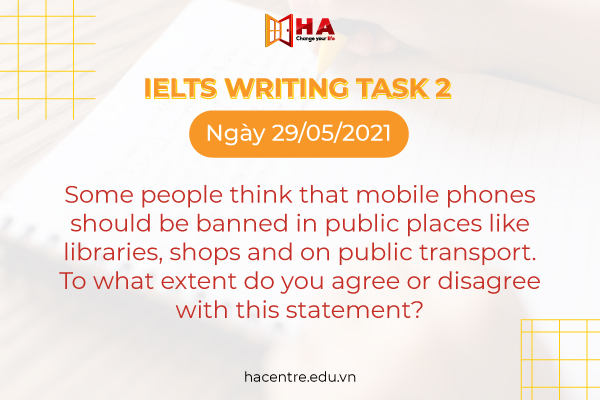 Đề bài: Some people think that mobile phones should be banned in public places like libraries, shops and on public transport. To what extent do you agree or disagree with this statement?

Recently, it has been suggested that people should be not allowed to use mobile phones in public places. In my view, although this ban could have certain benefits, it is highly impractical and therefore should not be implemented.

Proponents of a mobile phone ban often point to cases when phone use in public areas is intrusive. In a library, sometimes concentration is disturbed by someone making/taking phone calls or incoming SMS sounds. Phone use can also ruin the experience for others, as is the case where some moviegoers constantly use their phone, which emits annoying blue light or interrupts others with sounds from texting. More importantly, phone use in public allows for privacy intrusion. This happens when someone takes pictures or videos of others without their knowledge and uses them for unlawful purposes, with consequences ranging from unintended inconvenience to outright invasion of privacy. With a mobile phone ban in place, the number of the aforementioned incidences would decrease, making for a less interrupted experience when using publicly accessible services.

Nonetheless, such a ban is unrealistic because, for most people, mobile phones have become an indispensable part of life. Individuals in the technological era utilize the mobile phone for various tasks, both personal and professional. For instance, mobile technology has made it possible to check out quickly and conveniently in shops and supermarkets. Digital maps are now available via mobile devices, helping people navigate more easily. Another reason for phone use is to minimize boredom by listening to music or surfing the internet while waiting, say, for the bus. Besides, many people have to be by their phones even after work; without a phone, their productivity might be compromised. In short, a prohibition of phone use would unnecessarily deprive people of the important benefits of technology.

In conclusion, while a ban on the phone may ensure people’s experience in public places, it is outweighed by its impracticality, given the fact that the phone has been an integral part of life.

Mobile phones have become not only increasingly ubiquitous over the last few decades but also an integral part of modern life. It is, however, believed by some that there should be a ban on those devices in public areas. I think this is an unreasonable suggestion and should not be adopted.

Banning phones in public places seems impractical owing to their importance when it comes to communication for work reasons. The majority of jobs these days require employees to be constantly available for any problem that may crop up. For example, doctors need to be ready all the time for any emergency or surgery that needs their presence, which requires them to have their phones with them at any place, even in public areas. Therefore, if cellular devices are prohibited in such places, people’s daily work will be hindered to a great extent.

Apart from communication functions, mobile phones nowadays can serve as a device for multiple purposes, which are of great use in public places. In libraries, people can use their phones to search for different sources of information that are not available in paper books. Or, phones also enable consumers to compare the price of a particular product between different shops so that they can make a wise purchasing decision. Another striking feature of cellphones in recent years is their built-in GPS, which allows, for example, owners to search for directions while traveling or parents to track their children so as to avoid the risk of kidnapping. Those electronic gadgets are also a huge source of entertainment for people to while away the time by reading news, watching films or playing games when taking public transport.

Opponents of mobile use in public places may argue that phones’ rings and sounds can disturb the surrounding people and ruin their experience; nevertheless, this can easily be solved by switching phones to silent mode.

In conclusion, there are no reasons to put a prohibition on mobile phones in public areas as long as they are used with respect to others. 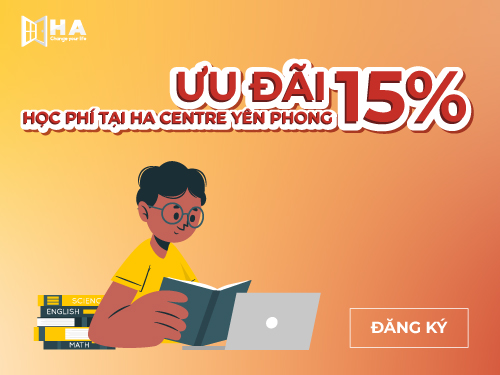